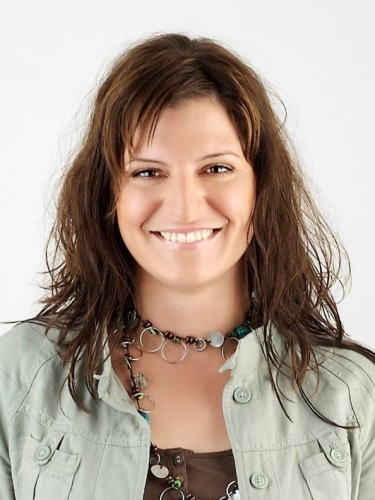 Toni McMahon
CANDIDATE QLD STATE ELECTION,
Townsville, 31st October 2020
Small Business Owner, Aromatherapist, Masseur, Developer of handmade natural & organic skincare, natural remedies &, herbal teas, Pranic Healer and Activist.
A born and bred Queenslander, Toni has been a Townsville resident since 1989. After an early career in banking Toni joined the Australian Army in 1996 as a heavy vehicle mechanic which is where she met her husband Alan who was serving with the Australian Air Force. Toni and Al have travelled extensively throughout their marriage, walking the Kokoda Track, diving deep sea wrecks around the world and getting off the beaten track in order to experience local culture.
During her time in the Defence force Toni served in East Timor which resulted in her being part of the now infamous Tafenoquine drug trials. These unethical drug trials have caused long-term, serious harm to many Australians serving this nation and were the beginning of Toni’s journey to expose the deception and cover-ups so prevalent between government departments, pharmaceutical companies and the citizens of Australia. As Toni says, “There is nothing quite like firsthand experience of a medical cover-up to inspire you to fight for your rights”.
Upon leaving the defence force in 2003 Toni purchased a local natural therapies business, which she renamed Plant Essentials, and began a journey of discovery and knowledge that has most recently led her to teaching others about natural health options.
Running a successful natural therapies business for 17 years has provided Toni with a front row seat to the constant erosion of personal freedoms and the continued legislation of an industry that pre-dates currently accepted medical practices. Personally, and professionally, she has fought to overcome the persecution and ongoing harassment by bureaucrats pushing the private agenda of big business and pharmaceutical companies under the guise of government regulations. It is time to stand up, speak up and make change!
Toni is an advocate for Natural Health options and has been on her own healing journey for many years following the drug trial. Toni is passionate about Pro-Choice and Pro Safety and is opposed to any form of mandatory or coerced vaccination or medication believing that we should have total control over our personal and familial health choices. An advocate for the full and open disclosure of the side effects of vaccines and medications Toni believes that where there is risk, there must always be choice! Her personal experience on the Tafenoquine drug trials highlights this.
Toni is an administrator for several Fluoride Free activist pages which supports her opposition to public water fluoridation and the mass administration of medications by the State. With an overwhelming belief that taking medication should always be the sole choice of the citizen, with guidance from their health practitioner, Toni will be advocating for the removal of fluoride, a known neurotoxin, from the drinking water of the remaining council areas in Queensland.
An advocate for informed consent, Toni believes all individuals should have the right to be supported by the health practitioner of their choosing. Health practitioners, equally, should have the right to speak freely in their professional opinion without the risk of being targeted or facing the removal of their license. The healthy debate of water fluoridation, vaccines, alternate therapies and other currently controversial subjects should not be censored nor made criminal.
As the Townsville candidate for the Informed Medical Options Party Toni is looking forward to providing her electorate with a voice in parliament that will support their right to personal medical freedom.
CONTACT:
toni@imoparty.com
facebook.com/imopQLD/
Ph: 0416 124 210
DONATIONS:
Bank: Suncorp
Account Name: Toni McMahon
BSB: 484799 | Account No.: 480266655
HOW TO VOTE CARD: 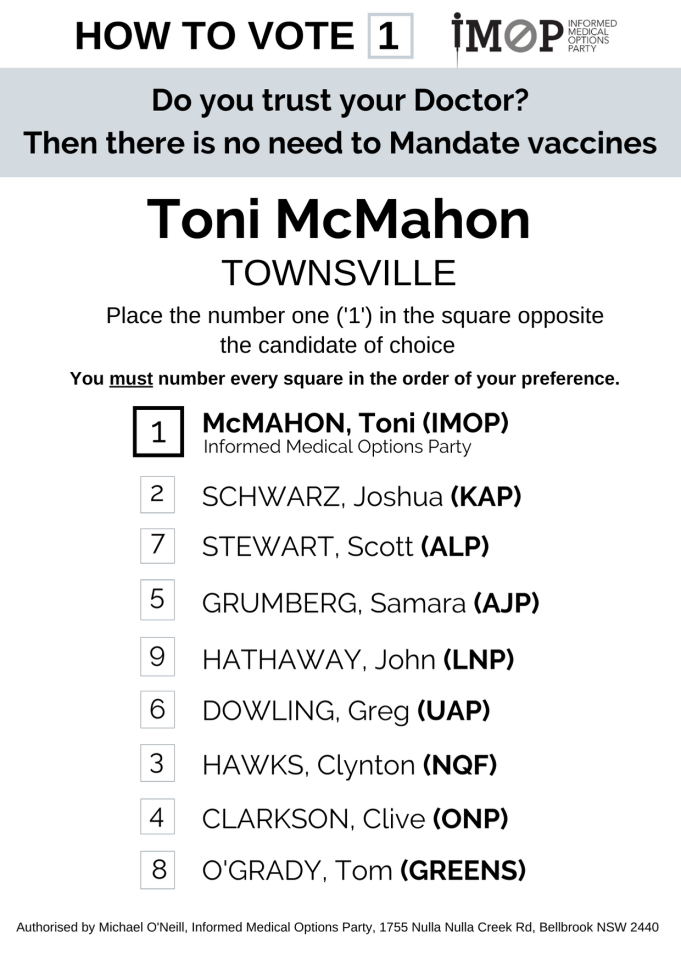