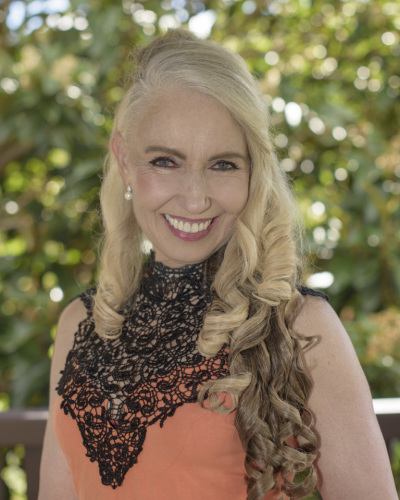 Marelle Burnum Burnum
Health Care Professional and Rights for Ethical Choice
NSW SENATE CANDIDATE, 2022 FEDERAL ELECTION
Previous elections:
- May 2019, Senate Candidate for Federal Election (NSW)
Marelle Burnum Burnum is standing alongside Michael O’Neill as a NSW Senate Candidate.  Marelle has a passionate commitment and belief in democracy, justice, human rights and freedom of choice for every Australian citizen, over their health and well-being. Both Michael O’Neill and Marelle Burnum Burnum stand before you to empower all the hundreds of thousands of Australians, whose voices have not been heard, about their fundamental right to determine their own healthcare and vaccination choices.  Marelle is also a strong advocate for animal justice and rights.
As the mother of an Aboriginal son and the wife of the late Burnum Burnum, Marelle has personal insight and life experience into the rights of indigenous people. Uncle Max Harrison, Yuin elder, is a direct advisor on Aboriginal issues to Marelle and the IMOP Party.
Marelle endeavours to work towards the establishment of a Royal Commission, through Australian Federal Parliament, into the safety and efficacy of vaccinations.
Professional background and experience

Marelle was a former teacher, as well as a healthcare professional with over thirty-five years’ experience. She is also a health educator, seminar presenter, advocate and public speaker about health-related issues. Marelle was awarded the Health Business Award for Best Health Improvements in 2017.
Marelle has been shaped by both her personal and professional life experiences. As the mother of an Aboriginal son and wife of her late husband Burnum Burnum. Marelle is acutely aware of the impact of government-imposed health interventions on our indigenous people.
Professionally, Marelle’s experiences have brought her into the lives of countless people, whose children have been seriously damaged and irrevocably harmed, due to the side effects of vaccines. Through Marelle’s interactions with parents and children, who have developed a range of serious reactions to vaccines, she has become a passionate advocate for independent, scientific research into the safety and efficacy of vaccines.
Vision and mission
Marelle has always believed that individually we can make a difference, but collectively we can stand strong and united in our quest for change. She believes that there is no greater imperative for change than the government’s imposed, 'No Jab, No Pay' policy.
In November 2015, Marelle and her colleagues, including Uncle Max Harrison, were instrumental in lobbying for and establishing a formal Parliamentary Inquiry into the proposed 'No Jab No Pay' policy. The government received thousands of submissions, which are now on the record, and many people spoke at the Inquiry. They were voices for change and voices for the truth. Refer links below to the submissions, hearing presentations and recommendations found on the Federal Government website.
However, even after the Inquiry and implementation of the bill in January 2016, the calls from Marelle, and the many others, for an investigation into vaccine safety and the vaccination schedule were ignored. The subsequent review of the impact of the legislation was tokenistic and not taken seriously by the politicians, who listened but did not hear the concerns.
Marelle has also been asked to speak to government representatives for the ‘Commission of Inquiry into the Drug Ice’ because of her heartfelt concern about the lack of long-term rehabilitation facilities for addicts and their families.
Commitment to democracy and choice
“I believe that evil thrives when good people do nothing,” says Marelle. “There are hundreds of thousands of good people calling for their rights and choices to be respected, heard and actioned by legislation that provides the truth about vaccines and their adjuvants,” Marelle continued.  Along with Michael, voting for Marelle and the IMOP Party means that they will be calling for a Royal Commission and an independent inquiry into all aspects of vaccines. They will continue to advocate for legislation that respects your rights to bodily integrity and your choices.
As part of their quest for good health for all Australians, Marelle and Michael are also committed to advocating for your rights to fluoride-free water, GMO-free food, affordable organic food and an eco-friendly environment.
A vote for Marelle, Michael O’Neil and the other IMOP Party candidates, is a vote for your voice to be heard LOUDLY on these important health and safety issues. We believe in freedom of choice and your right to choose and refuse, according to your values.
Your passionate and committed IMOP candidate,
Marelle Burnum Burnum
VOTE 1 IMOP and move Australia forward!
Submissions, hearing presentations & recommendations:
https://www.aph.gov.au/Parliamentary_Business/Committees/Senate/Community_Affairs/No_Jab_No_Pay
https://www.aph.gov.au/Parliamentary_Business/Committees/Senate/Community_Affairs/No_Jab_No_Pay/Public_Hearings
https://www.aph.gov.au/Parliamentary_Business/Committees/Senate/Community_Affairs/No_Jab_No_Pay/Report/b01
Feedback: "Dearest Marelle ❤ I was completely unaware of your running for senate until I was in the booth.. It reduced me to tears.. I met you in the 80's. I was a child and you helped me delay my vaccinations.. I was hoping to get away with not needing it, but the school forced the injection on me, quite aggressively. i am now a vaccine damaged adult..and have a severely vaccine damaged son, and both my girls will most likely develope my autoimmune conditions due to their having been vaccinated. What you do is so vitally important.. many many times ive wanted to contact you and heal the damage, at least for my kids if not myself, but a major downside of being vaccine damaged is being unable to work so it stays but a fantasy.. Seeing you on that paper gave me immense hope. I have grandchildren now. They get vaccines. It horrifies me now that i completely understand it. What you are doing could prevent their children from being poisoned and genetically damaged. Thank you Marelle, this literally means the world to me." Anonymous